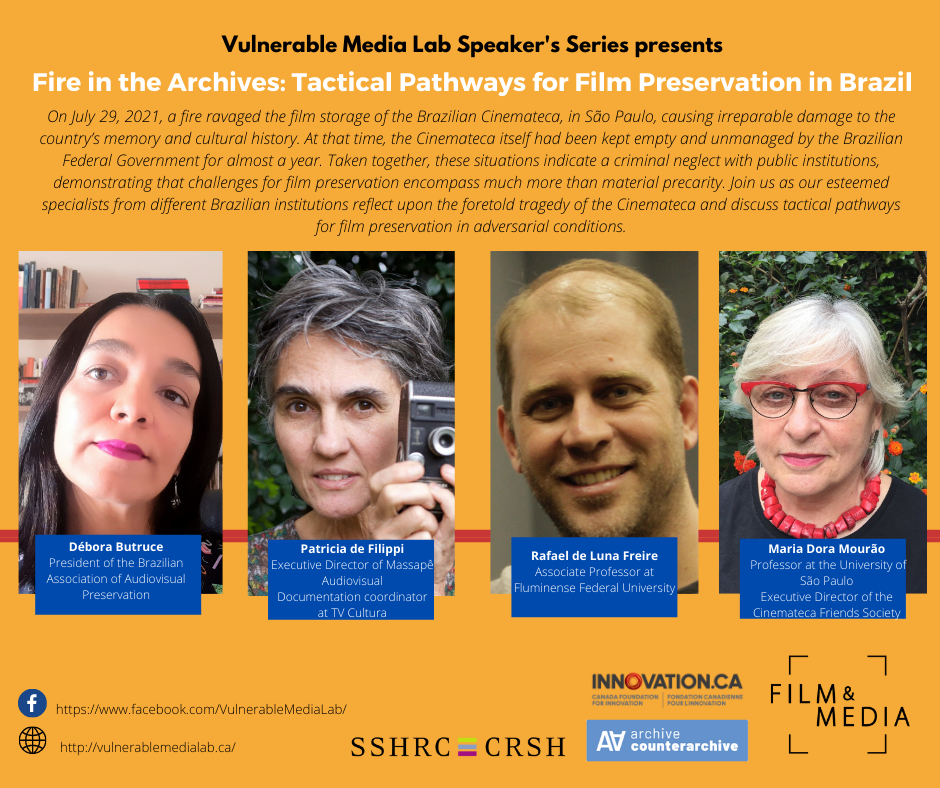 On July 29, 2021, a fire ravaged the film storage of the Brazilian Cinemateca, in São Paulo, causing irreparable damage to the country’s memory and cultural history. According to many, however, that wasn’t a mere catastrophic incident. Other museal institutions in Brazil, such as the Museum of Portuguese Language and the National Museum, had recently met a similar fate. At that time, the Cinemateca itself had been kept empty and unmanaged by the Brazilian Federal Government for almost a year. Taken together, these situations indicate a criminal neglect with public institutions, demonstrating that challenges for film preservation encompass much more than material precarity. In Brazil, in particular, both the dismantling of cultural organizations and the erasure of national histories have been part of a long-term political program – a political program currently in power. How to deal with these surmounting threats for the future of audiovisual media? In this first panel of the Vulnerable Media Lab Speakers’ Series, specialists from different Brazilian institutions reflect upon the foretold tragedy of the Cinemateca and discuss tactical pathways for film preservation in adversarial conditions.

Débora Butruce is an audiovisual preservationist, cultural producer, and film curator. She holds a PhD in Media and Audiovisual Processes from the University of São Paulo (Brazil). In 2018 she was a Visiting Scholar at NYU’s Moving Image Archiving and Preservation Program. Since 2001 she has been dedicated to the Audiovisual Preservation and Restoration area, working for Brazilian institutions such as Cinemateca do MAM-RJ, Arquivo Nacional, Centro Técnico Audiovisual, Academia Brasileira de Letras and other organizations abroad. She currently works as an independent audiovisual preservation consultant and as a curator for film festivals and streaming platforms. She is the founder of the International Festival of Home Movies. Débora is also the current president of the Brazilian Association of Audiovisual Preservation (ABPA) and has been a member of the Board of Directors since 2014.

Rafael de Luna Freire is Associate Professor in the Film and Video Department and in the M.A. and PhD Program on Cinema and Audiovisual at Fluminense Federal University (UFF), in Niterói, Brazil. He is the coordinator of the Audiovisual Preservation University Lab (LUPA-UFF), dedicated to the promotion and preservation of amateur cinema in Rio de Janeiro state. He was responsible for the project of restoration of the feature “Antes o verão” (Gerson Tavares, 1968) and the reconstruction of the first Brazilian sound film, “Acabaram-se os otários” (Luiz de Barros, 1929), together with Reinaldo Cardenuto. Freire has published widely on different aspects of Brazilian film history. His forthcoming booking is a study on the film distribution market in Brazil prior to World War I.

Maria Dora Mourão is Full Professor at the Film, Radio and Television Department, School of Communications and Arts, University of São Paulo, Brazil. She has been a post-doc researcher at the École des Hautes Études en Science Sociales (EHESS)/Centre de Recherches sur les Arts et le Langage, Paris, France. She was Vice-Dean of the School of Communications and Arts of the University of São Paulo (2009-2012) and was Head of the Department of Film, Radio and Television at the same School for three intermittent periods of four years each. She was also President of SOCINE – Brazilian society for film and audiovisual studies, FORCINE – Brazilian Forum for teaching cinema and audiovisual, CILECT – International Association of Cinema, Audiovisual and Media Schools and member of the Cinemateca Brasileira – Brazilian Film Archive Council. She has been Executive Director of Sociedade Amigos da Cinemateca – Cinemateca Friends Society for many years to date.

Patricia de Filippi graduated in Architecture and Urbanism and has worked in the areas of photography as well as photography, film, and TV preservation since 1984. She has studied at the New York City Public Archives and at the George Eastman Museum, in Rochester, USA. For 15 years, she coordinated the preservation and restoration lab at Cinemateca Brasileira/MinC, where she was technical director. For over 30 years, she has been working in the cultural area in projects for the preservation, restoration, and digitization of public and private collections including photographic, film, sound, television, and similar content. Recently, she has developed projects for the implementation of a Museum of Image and Sound and an Art Station in the state of Ceará, as well as the modernization and digitization of the TV Cultura / Padre Anchieta Foundation documentation center. In 2021, she coordinated the restoration of Terra Estrangeira (Walter Salles), and Rei da Noite and Lúcio Flávio, Passageiro da Agonia (Hector Babenco). 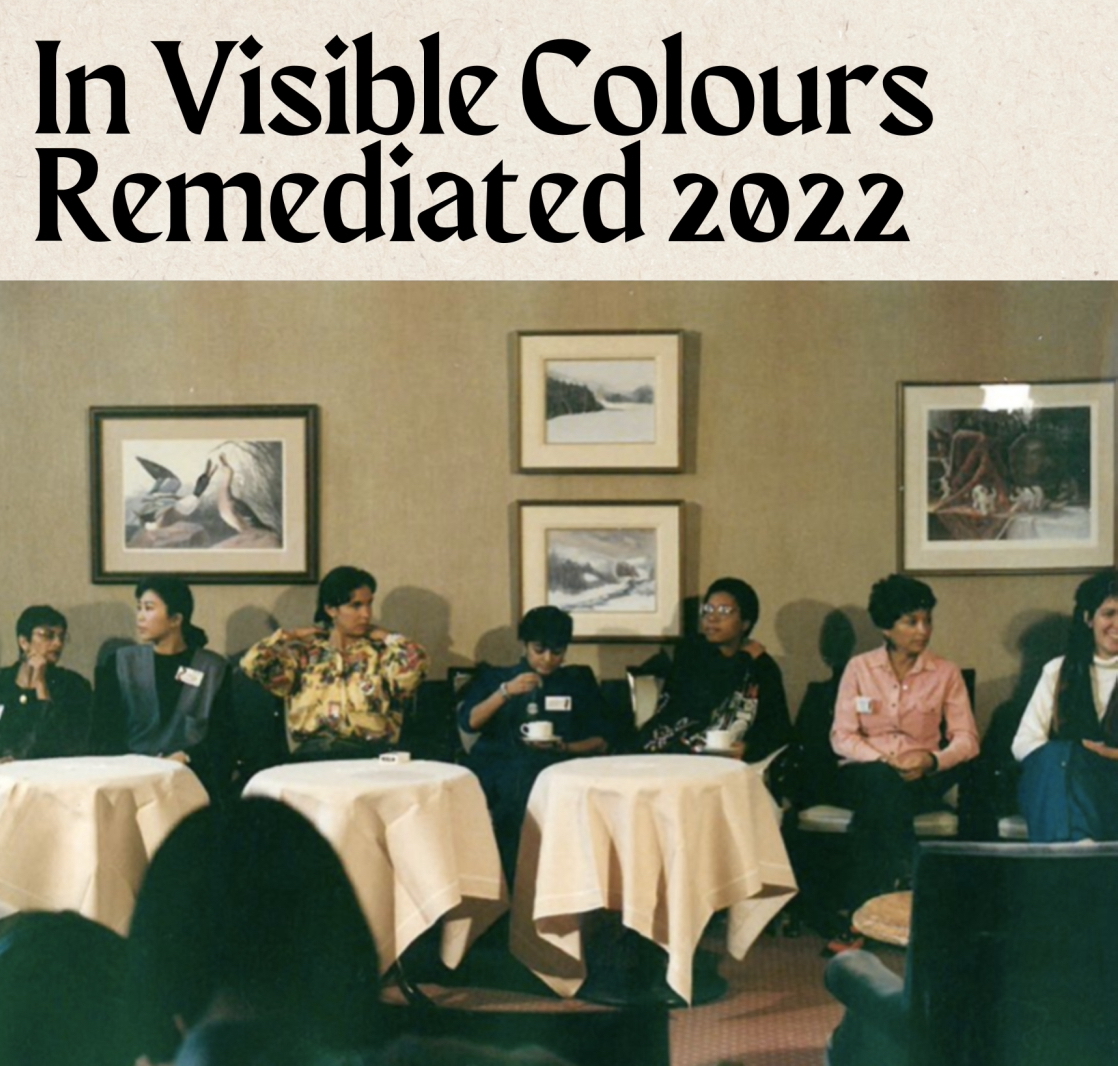